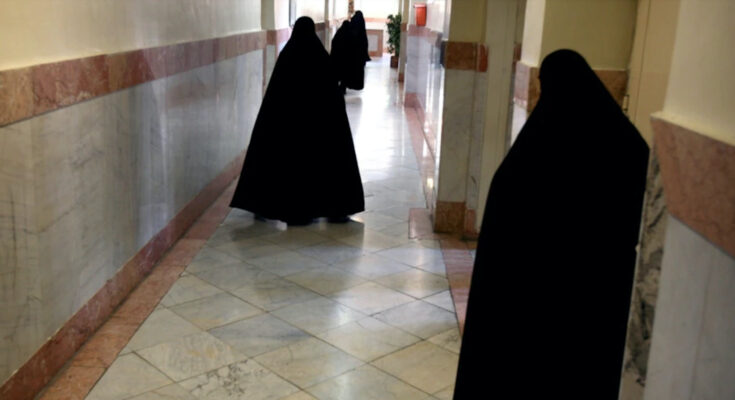 Human rights defender Narges Mohammadi says Iranian prison authorities use sexual abuse and harassment systematically to break the will of incarcerated women — and that she herself has been a victim.

Fear, shame, and a culture of avoidance may keep many victims of such practices from speaking out.

But Mohammadi and other former detainees in Iran shared their experiences during a May 27 group discussion on the Clubhouse social-media app — an online gathering that also was joined by the exiled Iranian Nobel Peace Prize laureate Shirin Ebadi.

“I felt like a sheep who was thrown into the car,” Mohammadi told the group about her forceful 2019 transfer from a prison in Tehran to the northwestern city of Zanjan.

She said a prison director held her lower body, pushed her into a car, and sat on her legs — then asked her to light a cigarette for him.

“I can’t diminish this to a physical assault,” Mohammadi told the group. “They [target] prisoners based on their gender.”

She says she also learned during her time in jail about other female prisoners being harassed and sexually abused — including one woman who suffered from serious mental problems after being groped by her interrogator.

“I have to ask [judiciary chief Ebrahim] Raisi himself if I was required to light the cigarette for the prison chief,” Mohammadi told the group. “Did I have to smoke with the head of your prison?”

Mohammadi is the spokeswoman for the Defenders of Human Rights Center, an organization co-founded by Ebadi that is now banned in Iran.

In October 2020, Mohammadi was released early from the 10-year prison sentence she received on charges stemming from her human rights work.

Her release was prompted by concerns about her health as well as calls from the United Nations and international human rights groups.

But less than a year later, she now faces a new sentence of 30 months in prison and 80 lashes on charges of “spreading propaganda” against Iran’s clerical establishment, “defamation,” and “rebellion against the prison authorities.”

She says the sentence is a punishment for her defiance and refusal to remain silent about rights abuses — including her participation in a prison sit-in protest against a deadly November 2019 crackdown by Iranian authorities against antiestablishment demonstrators.

Mohammadi said that if a person as prominent as her can be so easily mistreated, she worries about the fate of female prisoners who don’t have her public stature.

“I’m a 48-year-old woman. People know me,” she said. “When I saw how they treated me, I kept thinking about how they treat younger [women] who are unknown and are kept in solitary confinement.”

Other female prisoners in recent years also have accused interrogators of sexual harassment and psychological abuse.

Jailed ecologist Niloufar Bayani wrote letters to authorities detailing how she was tortured during 1,200 hours of interrogation.

She says her interrogators threatened her with rape and death, made her imitate the sounds of wild animals, and forced her to take part in their sexual games.