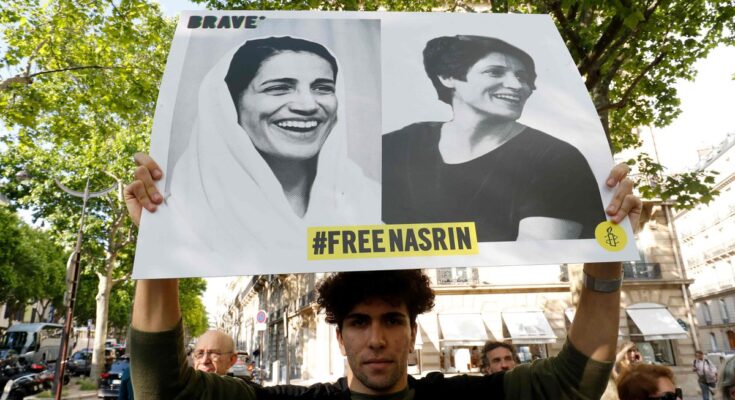 By Jeremy Wiener and Daniel Hornstein

“I realize they had arrested me for my work on human rights[…], still, I will not be silenced,” Nasrin Sotoudeh defiantly declared from the depths of Iran’s notorious Evin Prison, where she languishes for defending the dignity of the vulnerable. This past March, Ms. Sotoudeh was sentenced to 38 years in prison – a virtual death sentence for someone who is 56 years old – and 148 lashes.

In response, and in recognition of her fight for freedom, Queen’s University announced that it will award Ms. Sotoudeh an honorary doctorate in absentia. The administration and the students who petitioned on her behalf could not have chosen a more deserving recipient.

For being “fearless in taking on the cases that other lawyers would carefully avoid,” in the words of Shirin Ebadi, Iranian Nobel Peace Prize laureate and one of Ms. Sotoudeh’s former clients, she has been imprisoned not once or twice, but four times by Iranian officials. Her most recent “crime” was defending members of the Girls of Revolution Street movement who were arrested for waving their headscarves as flags of freedom in courageous defiance of the compulsory hijab dress code (she faced charges that included “insulting Iran’s Supreme Leader”). Her most recent act of courage was using the limited tools available to her from her cell and joining former high school teacher Farhad Meysami, in a hunger strike to protest against his and many others’ unjust imprisonments.

Such resolute resilience in the face of her people’s persecution represents the resolve of all Iranians and serves as a looking glass into Ayatollah Ali Khamenei’s Iran, where the rule of law has become the law of repression, and where the criminalization of innocence and defending human rights are institutionalized.

In November, in what was the most widespread demonstration of disobedience since the revolution in 1979, the government arrested more than 7,000 people and killed an estimated 1,500 peaceful protesters. After the regime lied about shooting down a Ukrainian airliner carrying many Iranian and Canadian civilians, protests resumed, but were met with swift suppression.

Among those arrested and killed are thousands of students, journalists, environmentalists, teachers, labour union representatives, members of religious minorities, and lawyers. There are few better ways of standing in solidarity with them and the Iranian public they represent than by standing with Ms. Sotoudeh, who has dedicated her life to their defence.

We expressed this sentiment to the administration at Queen’s University in an open letter signed and supported by more than 500 students and 50 faculty members. Underpinning our advocacy was the belief that those who enjoy the freedom that so many yearn for have a responsibility to use that freedom for the benefit of those without it, and that when students unite, our voices can be heard the world over.

Accordingly, so long as she and other Iranian – Saudi, Chinese, Russian and so on – human rights defenders remain in prison, we must stand up and speak out on their behalf, not relenting until they are freed. Governments and civil society have certainly taken up Ms. Sotoudeh’s case and cause – as exhibited by similar open letters signed by dozens of Canadian and European Union parliamentarians calling for Ms. Sotoudeh’s unconditional release and a variety of awards and honours that organizations have bestowed on her – but more must be done.

Perhaps the most effective tool at our disposal is the underused and undervalued Magnitsky Act, which specifically targets the individual architects of foreign repression with asset bans and travel freezes. Such targeted sanctions quash impunity, protect our banks and lands from becoming havens for the corrupt, and name and shame those most deserving of moral opprobrium – such as Mohammad Moghiseh, referred to as a “hanging judge” for incarcerating human rights defenders, including Ms. Sotoudeh.

Ms. Ebadi, former Canadian justice minister Irwin Cotler, and a cross-party group of MPs have all urged the government to impose such sanctions – thus far, to no avail. We must echo and amplify their voices.

Likewise, we must urge the institutions of civil society to join those that already have and replace silence with solidarity, so that more city councils grant Ms. Sotoudeh honorary citizenship as Paris did, and more universities honour her.

Ms. Sotoudeh, her husband, Reza Khandan – who was recently sentenced to six years in prison on charges such as conspiring against national security, because he defended his wife – their two essentially orphaned children, and the Iranian people for whom they have fought so valiantly, deserve no less.