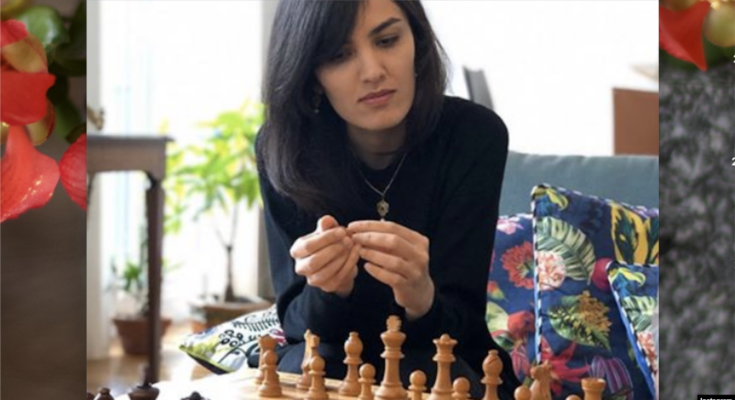 The Iranian female chess grandmaster Mitra Hejazipour who was sacked from the national team for boldly removing her headscarf (hijab) during the World Rapid & Blitz Chess Championship in Moscow, has said that hijab is “limitation” not “protection” as official regime propaganda claims.

In an Instagram post on January 28, the 27-year old grandmaster said the hijab is a clear symbol of an ideology in which women are “the second sex”. “It creates many limitations for women and deprives them of their basic rights. Is this protection? I say definitely not, it is solely and merely a limitation,” she wrote.

Hejazipour who says she was bullied by a relative at the age of six to wear a headscarf, even at home, now insists after years of wearing the hijab at all times and being “an example to others”, she has decided “not to have a share in this horrendous lie and not to play the game of ‘We love the hijab and have no problem with it’ anymore”.

Wearing the hijab became compulsory soon after the Islamic Revolution of 1979 when government offices, universities and schools, hospitals and other government-controlled places began banning women who were not wearing headscarves.

Gradually, wearing a headscarf became compulsory everywhere and places of business were compelled to enforce it by hanging signs that said “No entry without hijab”. Defying the hijab in any way could lead to detention, fines or even lashes in 1980s and early 1990s.

The minimum required level of hijab in Iran is a headscarf, a long garment or tunic and trousers. Women from more traditional families and the religiously devout, however, wear a long black veil that covers the head and the whole body.