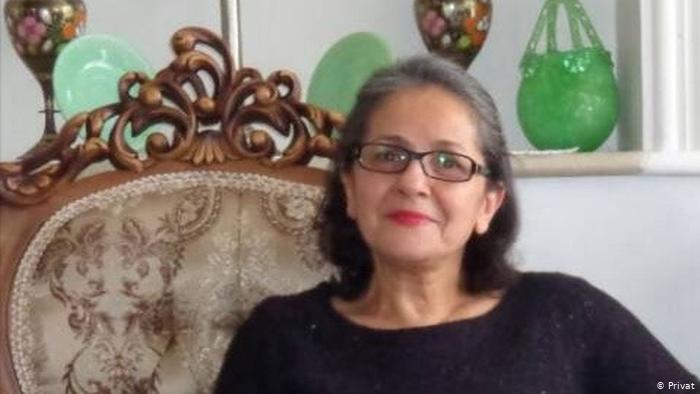 Nahid Taghavi was arrested in October 2020 in Tehran and had been in custody ever since. Taghavi is a human rights advocate in Iran.

A German-Iranian woman was sentenced to prison on Wednesday, charged with participating in “the management of an illegal group and propaganda activities against the regime,” according to HRANA news agency.

Nahid Taghavi was arrested at her Tehran apartment in October 2020 and has been held at Tehran’s Evin prison since.

She was known to be an advocate for human rights in Iran, in particular for women’s rights and freedom of expression, according to the human rights group IGFM.

The 66-year-old was handed a prison sentence of 10 years and eight months.

I can confirm that #freenahid has been sentenced to 10 years and 8 months in prison. https://t.co/Xp5KiYZsrc

Taghavi holds both German and Iranian passports. But since Iran’s authorities do not officially recognize dual nationalities, Taghavi was barred from receiving consular assistance from Germany.

Following Taghavi’s arrest, Claren said her mother had been held in isolation for a long period of time.

In July, after being transfered to the women’s wing of Tehran’s Evin prison, Taghavi reportedly contracted COVID-19 and was very ill.

“For someone at her age with preexisting health conditions and now testing positive for COVID-19, her life is in imminent danger,” Claren said, calling for her mother’s immediate release.

In June, Amnesty International (AI) decried the treatment she received while in solitary confinement, reporting that Taghavi was forced to sleep on the floor without a bed or pillow, was monitored around the clock, and was only allowed to go out into the fresh air for 30 minutes a day with a blindfold on.

AI called for her immediate release, saying she was being subject to an unfair legal process in Iran. The organization criticized the Iranian government for arbitrarily detaining dual citizens as a bargaining chip or for political negotiations.

Although the German government has not released a statement regarding her arrest, aside from mentioning that an unnamed German was being held in Iran, several politicians have spoken in support of Taghavi.

“Shocking verdict against Nahid Taghavi of Cologne Iran. As I did in April, I support the call for her immediate release,” said Andrej Hunko, a Left party member of the German parliament, or Bundestag.

Social Democrat spokesperson for human rights in the Bundestag, Frank Schwabe, also reacted to the sentencing, saying the charges were “unfounded” and calling the verdict “a farce.”