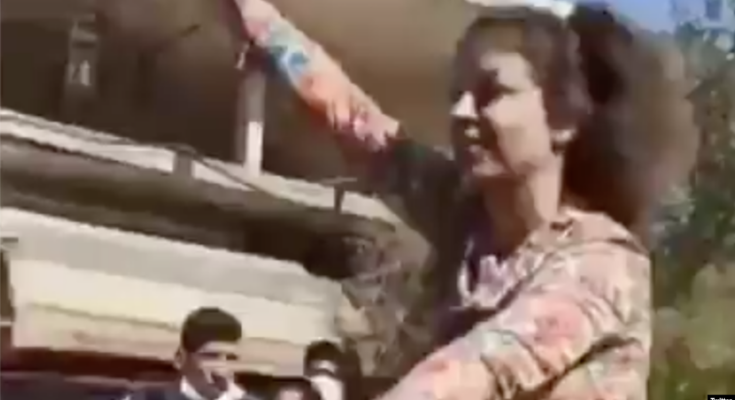 A young Iranian woman who rode a bicycle without wearing a hijab has spurred angry protests by hard-liners in Najafabad, a conservative city in Iran’s central province of Isfahan.

The unnamed woman was arrested earlier this week. Iranian authorities say her “motives” are being investigated.

But her current whereabouts are unknown and it is not clear if she has been given access to a lawyer.

Amateur video shows the unveiled woman riding her bike triumphantly in Najafabad’s city center while holding one her hands high. It quickly went viral on social media and many Iranians have praised her audacity.

In the video, a man who apparently is recording the footage from a car asks the woman: “Lady, freedom came? The shah has returned?”

After making the reference to the rule of Mohammad Reza Pahlavi, when Iranians had greater social freedoms, the man encourages the bicyclist by saying: “Bravo! Bravo!”

Reports suggest those who recorded video of the incident and posted it online also have been detained by Iranian authorities.

Hasanati attributed her defiant actions to Iran’s “enemies.” He says Najafabad’s good reputation for providing “martyrs” during Iran’s 1980-88 war against Iraq has been put under question.

“Praise to God, the wrongdoer has been arrested and she must be answerable to public opinion,” Hasanati was quoted by Iranian media as saying. “This was definitely not the result of an individual’s thinking.”

Hasanati claimed that the likely groups behind the “abnormal act” were members of the Baha’i faith, counterrevolutionaries, or the exiled opposition Mujahedin Khalq Organization (MKO).

Baha’is are persecuted in Iran and are often demonized by hard-line clerics.

The governor of Najafabad, Mojtaba Raee, claimed on October 19 that the city’s residents were angered by the woman’s “unprecedented norm-breaking” action.

Calling her bicycle ride an “insult to the Islamic hijab,” Raee announced what he claimed was a “spontaneous” protest in the city’s Imam Khomeini Square on October 20.

Usually, only state-sponsored protests are allowed in Iran. In November, hundreds of Iranian demonstrators who dared to take part in antiestablishment protests across Iran were killed by authorities in a brutal crackdown.

Videos of the October 20 protest posted on social media showed dozens of women in black chadors repeating slogans shouted by a man with a loudspeaker, including the chant: “Our nation is awake.”

The hijab became compulsory for women in Iran following the 1979 revolution that deposed the shah and led to the creation of an Islamic republic.

Since then, women have been required to cover their hair and bodies in public.

But Iranian women increasingly are pushing back against the hijab rule, despite arrests, fines, and harassment by Iran’s so-called “morality” police.

In 2018, dozens of women staged protests against the compulsory hijab rule by removing their head scarves in public.

About 30 were arrested for their defiance. Iranian human rights lawyer Nasrin Sotoudeh was also arrested after representing some of the detained women.

Even the riding of bicycles by women has been a controversial issue in Iran. Hard-liners, including influential clerics, have repeatedly spoken out against it.

In 2016, Iran’s Supreme Leader Ayatollah Ali Khamenei issued a fatwa declaring that it is forbidden for women to ride bicycles. But the fatwa was not strictly enforced.

In recent years, an increasing number of women have been riding their bicycles in large cities, including the capital, Tehran.

Tehran’s Mayor Pirouz Hanachi reportedly has even encouraged cycling by men and women as a way to combat pollution in the city.

But in more conservative cities like Isfahan, cyclists have faced resistance from conservative clerics and their supporters, who oppose greater freedom for women.

In 2019, Isfahan’s prosecutor, Ali Isfahani, declared that Islam forbids women from riding bicycles and that women cyclists are banned in the city.

Isfahani’s declaration was protested by women and others who said it doesn’t make sense to ban women cyclists in Isfahan while the practice is allowed in Tehran.

“Laws are the same all over Iran; therefore, it is not possible to have a certain law in Isfahan and another one in Tehran,” lawyer Abdolsamad Khoramshahi told an Iranian news site.

Meanwhile, a spokesman for Iran’s judiciary has said that women are not banned from cycling as long as they respect religious rules.