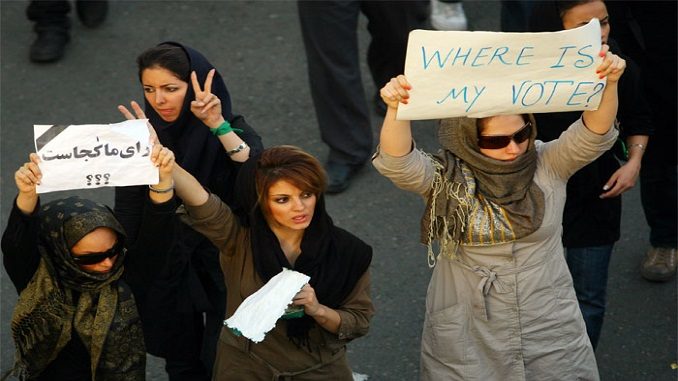 When speaking to an international audience, Khomeinist officials often cite the fact of these elections as “evidence” that the regime is representative of the Iranian people. Mohammad Javad Zarif, the regime’s foreign minister, and the most vocal spin doctor for the ruling order, has repeatedly claimed that 73% of Iranians vote in the elections, contending that the people of Iran approve of the regime.

Zarif’s claims however do not stand up to any scrutiny. Here are the reasons why:

The ruling Shi’a clerics were long opposed to women even being able to vote, given that they believe that women are the men’s property. Under Sharia law women are considered to have the same rights as minors, criminals, and the mentally ill.

The regime that Mr. Zarif serves, actively shuts women out of all the political processes, women under the current regime are again relegated to the status of nonpersons.

In the words of an open letter sent by 14 women activists last year, the Shia clerics have “effaced one half of the country’s population – in all of their capacity and capability – and disrespectfully detracted from our equal rights and human grace…… many of the basic human rights of we women were sacrificed, and women’s sexuality and identity became beholden to the iron grip of the Guardianship of the Male Sex and patriarchal culture.”

Zarif is cognizant of the fact that Iranian women realize that under the Khomeinist gender apartheid, their situation will never change. This is why women’s rights campaigners have repeatedly and publicly boycotted the sham elections in Iran and called for governance that will respect the separation of religion and state and a democratic government for and by the people.

Mr. Zarif appears to have forgotten the 2009 uprising where Iranians all across the board poured into the streets to ask “where is my vote;” or perhaps he hopes that the world at large has forgotten.

The next legislative election in Iran is scheduled for 21 February 2020.