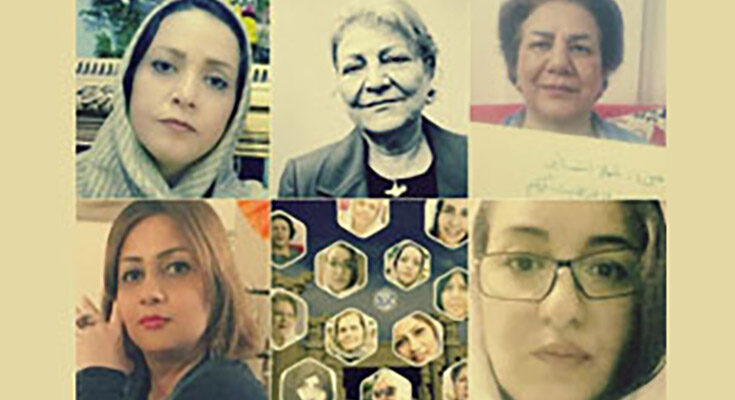 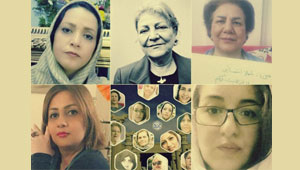 The trial of five female activists who signed a letter calling for Khamenei’s resignation and an abolition of the Khomeinist regime, was held in in the Revolutionary Court on Monday, October 21st.

Shahla Jahanbin, Shahla Entesari, Giti Pourfazel, Zahra Jamali and Nargess Mansouri are among those who wrote and signed the petition. Since their arrest on August 5th, they have been jailed in Tehran’s notorious Evin prison and have been denied legal counsel or lawyers. Trials of political and civil activists in Iran are held behind closed doors, thus the news of their trial has not been released.

Among the first people who were detained August 11th, were Hourieh Frajzadeh and Fatemeh Sepehri.

Hourieh Farajzadeh is the sister of Shahram Farajzadeh, who was trampled by Tehran Police vehicle in Vali Asr Square during 2009 anti regime protests.

Fatemeh Sepehri, a civil and women’s rights activist is the widow of an Iran-Iraq war martyr, who was arrested along with her brother on August 20th, in Mash’had.

On Sunday, August 12th, security agents arrested Narges Mansouri while she was returning home. Mansouri is a workers, women and civil rights activist; she is a member of the Bus Drivers’ Syndicate and her father was killed in the Iran-Iraq war.

On Wednesday, August 21st, Shala Jahanbin another signatory of the petition was beaten and arrested and her personal belongings including her cellphone were confiscated; the next day, on Thursday, August 22nd, security agents entered Shahla Entesari’s house in Rasht and arrested her.

On Saturday, August 24th, Shahla Jamali another civil activist and signatory of the petition was arrested in Tehran. On the same day, security agents arrested lawyer, Giti Pourfazel. She had disappeared five days prior to the statement.

Mother of political prisoner Soheil Araabi, Farangis Mazloom, who had signed the petition, had been arrested before the publication of the petition and had been detained in ward #7 of Evin prison, was released on bail on Tuesday, October 8th.

The trial of the signatories of the petition began despite the fact that the Islamic regime’s judiciary has not yet announced their charges.