Iranian climbing champion Elnaz Rekabi says she inadvertently competed without a hijab at an international competition in South Korea.

The incident comes amid concerns for her safety after many commented that they thought Rekabi was supporting protesters who have taken to the streets of Iran over the death of a young woman who was in police custody for allegedly wearing the headscarf improperly.

Rekabi, who finished fourth in the Asian Championships, went missing for several hours after competing, raising fears that Iranian authorities had taken her back to Tehran on October 18.

Iranian rock climber participated hijabless in an Asian rock climbing tournament. She is the first female climbing medalist in Iran.
She will be transported to jail as soon as she returns to Iran! #مهسا_امینی #MahsaAmini #IranRevolution #Evin
pic.twitter.com/JawN1PqO6i

The 33-year-old said in an Instagram post that she competed without the hijab, which is mandatory for Iranian women to wear in public, “due to poor scheduling and an unexpected call for me to climb.”

“I inadvertently had a problem with my cover,” she said, adding that she was returning to Iran with the team “according to a pre-arranged schedule.”

It could not be verified whether Rekabi made the post freely and independent of pressure from Iranian officials.

The controversy comes after a month of unrest across Iran — one of the deepest challenges to the Islamic regime since the revolution in 1979 — sparked by the death of 22-year-old Mahsa Amini after she was taken into police custody for allegedly breaking hijab rules.

Since the start of the protests, several Iranian sports champions and prominent public figures, including soccer star Ali Daei, have been summoned or arrested by the authorities and had their passports confiscated after showing support for anti-government protests.

The hijab — the head covering worn by Muslim women — became compulsory in public for Iranian women and girls over the age of 9 after the 1979 Islamic Revolution. 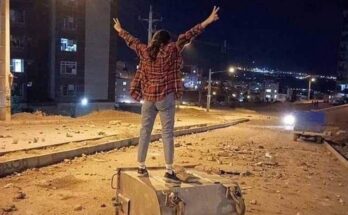