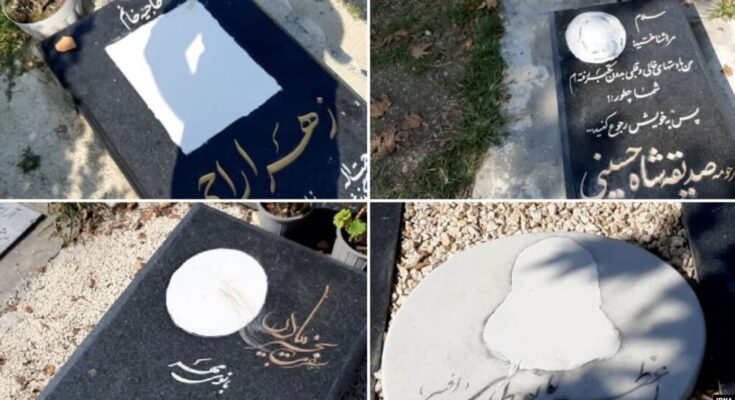 The board of trustees of Royan City Cemetery in Mazandaran, northern Iran, has distorted the images of women carved on their gravestones without informing their relatives.

“Putting the images of women on their gravestones is not religiously and traditionally correct,” the board responded.

However, the images on the tombstones at Royan cemetery “mostly belonged to elderly women covered in full Islamic hijab,” and the officials damaged the gravestones without warning.

Based on IRNA’s report, the protesting citizens of Royan complained to the city authorities, noting that the move somehow amounts to “destruction of property” while emotionally harmful to the suffering people.

One of the citizens, whose mother’s image has been smeared with paint, Ms. Fatemeh Haji Ahmadi, told IRNA, “My mother’s only wish was placing her image on her tombstone.”

Another citizen criticized the board of trustees’ decision, citing Shi’ites’ sources of emulations, saying that placing women’s images on their tombstones was permissible, provided they were covered in Islamic hijab.

Destroying or damaging some graves or destruction of cemeteries in Iran is not unprecedented.

Since the downfall of Iran’s pro-West monarch and the establishment of the Islamic Republic in 1979, dozens of Baha’i cemeteries have repeatedly been destroyed.

In another controversial case, in August 2018, Ahvaz’s municipality, the capital city of the Khuzestan province, in southwest Iran, released reports on the “complete destruction of mass graves” of the victims of the 1980s mass executions of the political prisoners serving their terms.

Furthermore, in some cases, there were also attempts to destroy the tombstones of figures such as Neda Aqasultan and Mustafa Karimbeigi, killed by the Islamic Republic security forces and Special Units during the widespread protests against the official result of the 2009 presidential election.

In 2014 the IRGC announced that they would build a sports complex on the site of a Baha’i cemetery that held the graves of ten women who were executed in 1983.

One of them, Mona Mahmudnizhad, was only seventeen years old when she was hanged.

The Baha’i people are the largest religious minority in Iran.