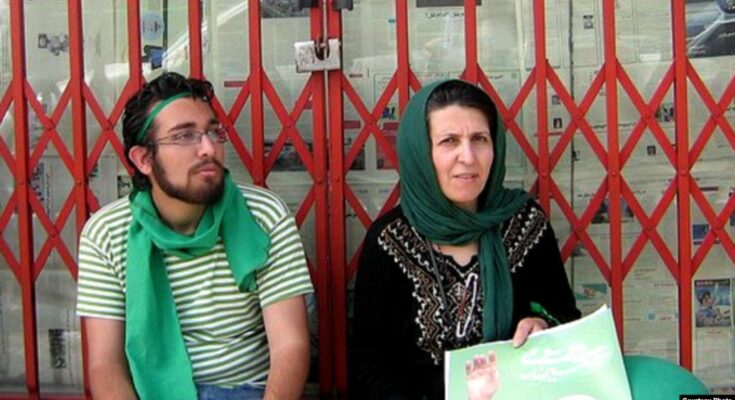 Parvin Fahimi, a tiny woman with a strong personality, has emerged as one of the heroes of Iran’s Green movement, which opposes the legitimacy of Mahmud Ahmadinejad’s presidency.

The grieving mother has refused to remain silent over the fate of her son, Sohrab Arabi, who was shot dead under unclear circumstances during Iran’s postelection crackdown. In publicly expressing her outrage, she has become the voice of other mothers mourning loved ones lost during the unrest that followed the disputed June 12 presidential vote.

Recently, after the deaths of three protesters at Tehran’s Kahrizak detention center led to public uproar and calls by opposition politicians for an investigation, former parliament speaker Gholam Ali Haddad Adel downplayed the deaths, noting that the detention center has since been closed.

An outraged Fahimi responded by sending a letter to Haddad Adel in which she said that, as a member of the parliament, he had an obligation to defend the rights of the people and to refrain from making comments that can cause them pain.

“Would you have made the same judgment if your child had been tortured and killed in the streets, like ours?” she wrote.

Fahimi told RFE/RL that the comments by Haddad Adel and similar ones made by other officials pour salt on the wounds of victims’ families.

“As a mother, I felt that the blood of our children was being trampled,” she says. “I can’t tolerate anyone talking like this about these issues.”

‘The Mother Of Sohrab’

Fahimi’s outspokenness and courage has earned her the respect of many Iranians, who refer to her simply as “the mother of Sohrab.”

She demands that those responsible for the killing of her son — and others who died for opposing Ahmadinejad — be brought to justice.

“How could they kill my child or the children of others? Just because of a [peaceful] protest?” she asks. “Just because these children protested and wanted their vote back, they deserved to be killed?”

Fahimi’s son disappeared on June 15 — three days after the contentious vote that resulted in Ahmadinejad being decisively reelected to a second term. She was told that Arabi had been detained but heard no word of his whereabouts until she was informed of his death nearly a month later, on July 11.

To this day, the 53-year-old Fahimi knows little about the circumstances surrounding her son’s death.

“The only thing [the authorities] told my lawyer is that [my son] was shot from a distance of 3 to 15 meters,” she says. “It’s not clear whether he received treatment or whether he was taken to a hospital.”

Fahimi was with Arabi the day he went missing. She and her son, both supporters of reformist presidential candidate Mir Hossein Musavi, took to the streets of the Iranian capital along with hundreds of thousands of other Iranians to protest what they believed was a stolen election.

They lost each other in the crowd. Fahimi returned home and waited for Arabi, but he never returned.

Fahimi went to Tehran’s notorious Evin prison, where many of those detained in the postelection rallies were being held. She contacted different authorities in the hope of hearing word of her son but was never given a clear answer, only that he was in detention.

It was Arabi’s brother who determined his fate, after identifying Arabi’s picture among images of dozens of others who died during or after the postelection crackdown.

During Arabi’s funeral, Fahimi vowed not to remain silent.

Despite pressure exerted by Iranian authorities on victims’ families, Fahimi has kept her promise.

Through letters and meetings with authorities, she continues to tell her son’s story. She participates in protests, including one during official Quds Day (Jerusalem Day) events on September 18, when tens of thousands of citizens in Tehran and other cities protested against Ahmadinejad.

Died For His Ideas

The name of her son has not been forgotten and is now shouted, among other rallying cries, by crowds voicing their anger with the Iranian government.

Fahimi tells RFE/RL that she believes her son did not die in vain. He died for his ideas, she says, and will always remain alive.

“Inshallah, the future belongs to us because people will never back down in the face of so much violence, repression, and injustice,” she says.

According to opposition sources, 72 people were killed in the postelection unrest. The government puts the figure at about 30.

Every Saturday for the past four months, mourning mothers and others who share their pain have dressed in black and gathered for peaceful marches in a Tehran park.