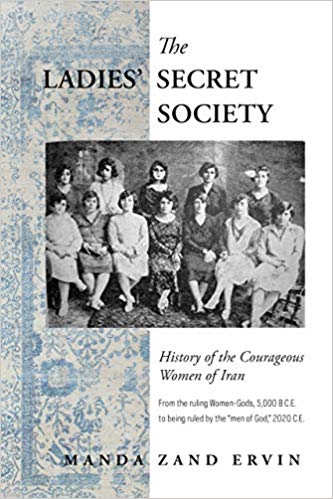 The Ladies’ Secret Society: History of the Courageous Women of Iran

This riveting and remarkable book reveals, in print for the first time, the long history of struggle against clerical domination that Iranian women have been engaged in for centuries. Rooted in the proud history of ancient Iran, where Mother-Gods were once worshipped, the Ladies’ Secret Society, an organization founded in the early decades of the 20th Century, was both the inheritor of this proud history, and the progenitor of the contemporary women’s rights campaign in the Iran of today. Zand Ervin relates the stories, and records the accomplishments, of generations of individual women activists, who fought like lionesses for every scrap of freedom they gained, only to see all their hard-won rights destroyed with the coming of Khomeini’s Islamic Revolution. During the Islamic revolution, Zand Ervin witnessed the execution of many innocent people, including her high school principal, who was executed simply because she was a woman, and the Secretary of Education. She offers heartbreaking and compelling eyewitness testimonies of strong and emancipated women who were brutally pushed backwards to living under a crude, medieval society, and who have fought back, under sometimes impossible odds, and continue fighting today. Manda Zand Ervin’s History of Iran, the Iran that has been imprisoned behind a veil offers an insight and context to news of terrorism and the dangers caused by the misogynistic clerical regime ruling Iran which continues to dominate headlines.

Manda Zand Ervin is the founder and president of the Alliance of Iranian Women, an organization that brings the voices of Iranian women living under the Khomeinist regime’s Sharia Laws to the West.

Born in Iran, and educated in the United States, Ervin was the managing director of the department of statistics and international affairs at the Customs Administration of Iran prior to the 1979 Islamic Revolution. In 1980, Ms. Zand Ervin came to the United States as a political refugee and became a US citizen three years later. As a women’s rights activist and leading expert on Iranian affairs, she is frequently consulted by Members of Congress, and she has testified at Congressional briefings, the Helsinki Commission, and the United Nations. In February 2008, Zand Ervin was appointed as the United States’ Delegate to the United Nations’ Commission on the Status of Women. She was also the featured speaker at the G8 Summit in Rome, on Violence against Women in 2009.  In 2012, she received the EMET Speaker of the Truth award.

Manda Zand-Ervin’s articles have appeared in National Review, American Thinker, the Washington Times, PJ Media, Gatestone Institute and many others. She has appeared on CNN, Fox News, BBC and regularly speaks on human rights, women’s rights and the Middle East.